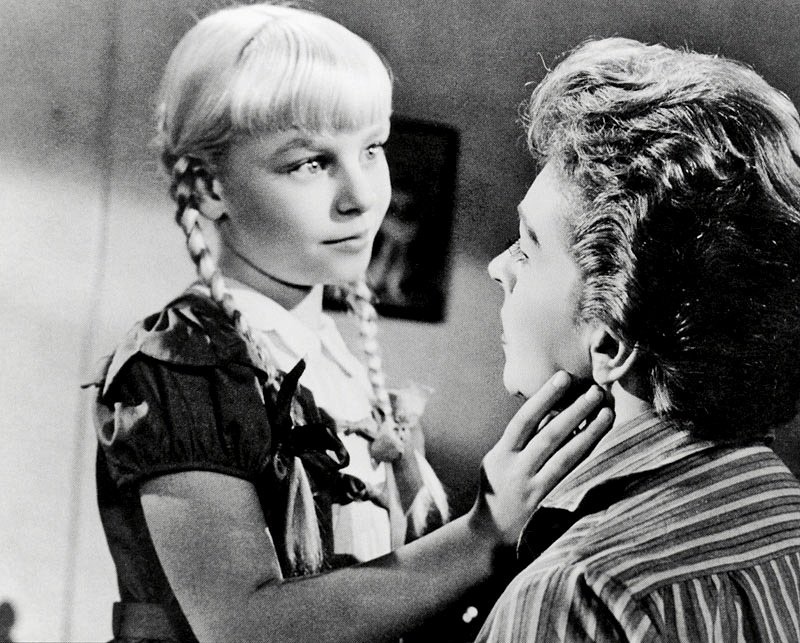 That gutting question cuts to the existential heart of The Bad Seed, a 1956 dramatic black-and-white thriller starring Nancy Kelly and Patty McCormack known to many now for its camp quality. An adaptation of a book by the same title, the film is one of the earliest to shape the “evil child” trope centered on the blonde-pigtailed, disturbingly precocious Rhoda Penmark, a charming child who resorts unrepentantly to violence in order to obtain any object of desire not immediately given to her. Creepy “good little girl” murder ensues.

But the story of The Bad Seed isn’t so much about Rhoda as it is about the turmoil of her mother, Christine, and her unraveling as she watches her child’s behavior spiral out of control. Christine additionally wrestles on her own with nagging suspicions of having been adopted; there’s a dark veil of fog over her early childhood that bothers her, despite a happy upbringing with her mother and father, Richard. In the film’s most pivotal scene, Christine, already shaken by the fear that her daughter has killed another child, dares to ask her father, “Daddy, whose child am I?” She shrivels in a moment of stunning revelation as she realizes that she is not the biological child of her known parents. She clutches at her stomach, shrieking, “Oh God help me, Gold help me!” It would not all be so horrifying if it weren’t for the fact that her true mother is revealed as Bessie Denker, a renowned sociopathic serial killer and one-time object of Richard’s academic studies. Having witnessed escalating sociopathic behavior in her own daughter, Christine is now certain that Rhoda is doomed to a life of manipulation and incessant destruction in following with her biological lineage.

Trapped as the sole person with enough understanding to see what a danger Rhoda is to society – but unwilling to turn in her daughter for fear of her becoming a spectacle – Christine decides to end Rhoda’s life by giving her an overdose of sleeping pills. And in the film’s most unsettling moment, Christine then walks off camera into her bedroom and shoots herself. The end of the film is something I won’t divulge, but I recall the suicide scene of The Bad Seed leaving me particularly distressed as a child. Perhaps it was because I hadn’t been introduced to suicide much in film before (up until then remaining just an odd idea in my head), or perhaps I didn’t expect such a graphic shock from an “old movie.” But regardless of your age or life experience, Nancy Kelly and director Mervyn Leroy do nothing to spare the audience from Christine’s feeling of the world closing in on her. Her husband is unreachable, away on military duty. The local school administration has cast her off. And her concerns regarding her daughter are continuously repudiated by some truly daft and ignorant neighbors. Christine’s all-encompassing desperation – which ultimately gives way to hopelessness – is something altogether more frightening than the sudden sound of the self-inflicted gunshot.

As a Christian, I can’t help but find theological resonance in the characters’ plight in The Bad Seed. While the film deals superficially with themes of pop psychology and nature versus nurture, I am captured time-and-again by Christine’s horror over her lineage, what it means for her daughter, and whether her adoption by a good father has any power or meaning over her own personhood. Though Rhoda is the main object of amusement in this film (it’s hard to forget a kid in a petticoat dress practically salivating as she recounts her murder of a classmate), she serves as both backdrop and catalyst for Christine’s crisis of identity. Rhoda is the embodiment of our depravity and utterly complicit helplessness against our line of descent in Adam–deceiving of the self, deceiving of others, “born without pity” as described in the film. There is nothing that can be done by Christine’s hand to effectively stamp out the evil in Rhoda’s nature; the only way to stop it is to end her life. It does not matter that Rhoda has been raised by a loving mother–the bad seed cannot unlearn what lies embedded in its DNA.

But the greatest tragedy in this story is Christine’s dejection upon discovering her own biological parentage. Her turmoil is an illustration of our deep need as Christians to embrace our new heritage as adopted children of God the Father, lest we be condemned to the fate of our forefather, Adam (Rom 5:12). While the truth that she descends from an antisocial murderer (and the fact that she has likely begotten one) is horrifying, the greater truth – what you long for Christine to claim – is that she is Richard’s child. Her biological lineage be damned. She has been saved by her father.

When we ourselves ask, “Daddy, whose child am I?” – with all the pain and suffering of our past, present, and future – it is the Lord who answers, “Mine.” Christmas hymn Hark! The Herald Angels Sing anticipates the conquering and redemptive seed of Christ with confidence:

Come, Desire of nations, come!
Fix in us Thy humble home:
Rise, the woman’s conqu’ring seed,
Bruise in us the serpent’s head;
Adam’s likeness now efface,
Stamp Thine image in its place:
Final Adam from above,
Reinstate us in Thy love.

Christ, the seed of the woman, has conquered over sin, death, and the devil (Gen. 3:15; 1 Cor. 15:55-57). In Him, we receive our new name, our new identity, our new home, our hope for our lineage: all of it rests firmly in our adoption by the Holy One. It is His image we now bear, and the mind and character of Jesus we can now hope to put on (Col. 3:1-4). Indeed, through him we have been born again into a living hope (1 Peter 1:3). Your heart aches for Christine to know and believe whose child she truly is in the very fiber of her being. For even if there is no hope for Rhoda, there is still hope for her.

May the conquering seed of Christ bring hope into the darkest corners of your mind and life this Advent season. Thanks be to God!

Does beauty at thebrightblush.com. Does movies at grindhousetheology.wordpress.com. Does hot Cheetos all the time, anywhere. View all posts by McKenna Rishmawy