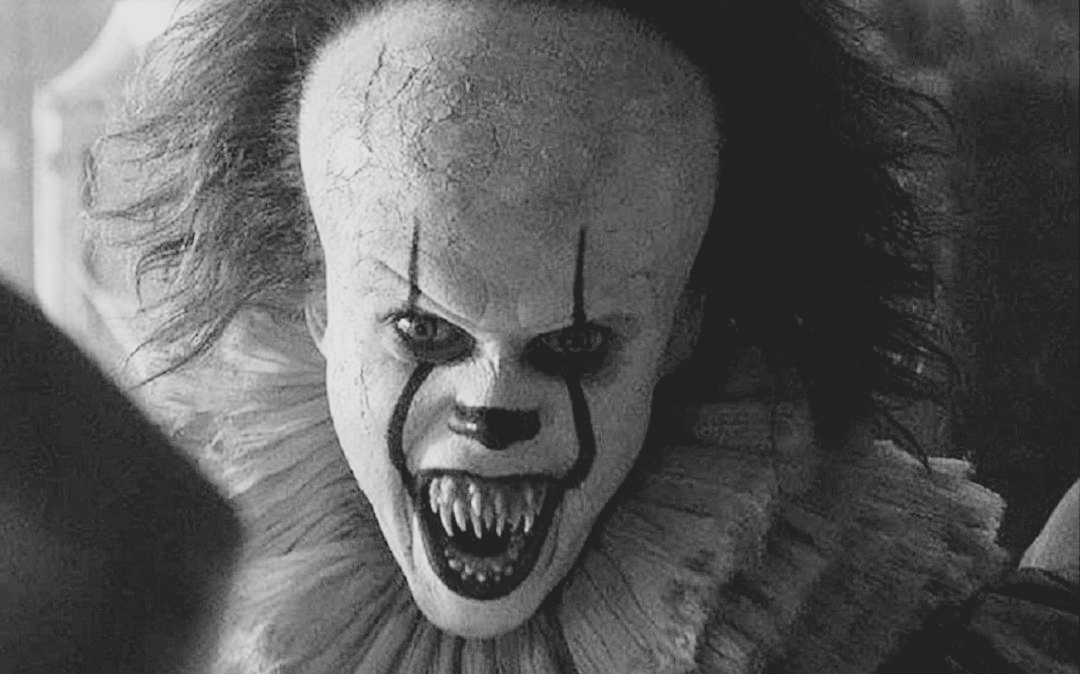 Sequels rarely surpass the original, and for good reason – the first film in a series often begins life as a spec script, written with care and at leisure. The end product, more often than not, comes out fully cooked – or at least adequately so. Not so with It: Chapter One, which – after a lengthy incubation period and multiple production turnovers, managed to be both a dull horror film and a damnably bland coming-of-age story.

I regret to inform readers that most of the faults from It: Chapter One are present here, as well, but I’m pleased to report something is different.

It: Chapter Two is best when it’s ominous-rather-than-obnoxious, and it’s obnoxious more often than ominous. Nevertheless, its drawn-out bursts of obnoxiousness are fewer and further between than in the previous installment – and that with an extra hour of run time. And its moments of genuine tension – of insides-twisted-up,-hands-clutching-the-seat-of-your-chair typed unease – are more frequent, more memorable, and, frankly just more.

It: Chapter Two is more: More of a film than its predecessor, if less accessible. More to-the-point, even with an hour of added material. The scares, when Andy Muschietti can keep his pathos in his pants, stick with you longer, and the images presented simmer in the back of your mind long after the juvenile grotesqueries of It: Chapter One vanish into nothingness. I’ll just say it. I liked It: Chapter Two. It: Chapter Two is good. It’s a good movie. Fine. There it is.

And there’s more: It’s not just the “ominousness” that claws its way past your defenses, it’s the earnestness. It: Chapter Two is beset with earnestness – the sort of earnestness that might encumber a lesser film and bury it beneath the frequent-and-admittedly-jarring tonal shifts. And yet. The ship never capsizes. It: Chapter Two never quite “jumps the shark.” It stays the course and lands safely. Pick your metaphor, the blasted thing works.

Let me explain. If It: Chapter One was a big wet piece of white bread that you found in the sewer drain, took a bite of, and was for some reason beloved by critics (okay, that metaphor wasn’t the best), It: Chapter Two is a rather gnarly piece of rye bread, dipped in egg and battered in Pop Rocks candy before being dropped in the deep fryer and served up to you while you’re tripping on some mushrooms you were given by the fry cook at the restaurant you work at (none of this is autobiographical).

That is to say, it is not Classically Good. There are structural issues. Emotional beats fall flat (or, at points, swerve off the rails). The “scares” are the weakest element, which isn’t exactly a “golden pitch” for a horror movie. And yet, I didn’t regret a moment of it. It was something. Literally, something. Specifically, it was a fascinating “something.” And, like the strangely ornate piece of rye toast, it was moving.

To frame it in terms more specific to Stephen King (and bear with me here): It: Chapter Two has the manic genius – the trash-heap euphoria of a film like Sleepwalkers, but with better bones; if  that same sheer, gleeful hysteria is the “blood” and “meat” and “endocrine system,” somewhere beneath the color and racket is a skeleton that supports Andy Muschietti’s images much better than that of his previous outing. I cannot explain it. I’m not even sure I can defend it. I’m struggling to articulate it. And yet.

My friend Will suggests that the issue may be that I simply went in with needlessly low expectations and was pleasantly surprised. That might be it. And yet, and yet. That only goes so far. I love to be pleasantly surprised, and I’m fairly easily-pleased, which makes my utter disdain for It: Chapter One something of a mystery, but it’s there. And I saw that one three times. Literally, three times. I spent $30 watching that movie because I couldn’t figure out what other people saw in it that I didn’t, I was sure the problem was me. One year later, and it’s not me. It’s that dang movie.

Not so with It: Chapter Two. This film’s got most of the structural and aesthetic issues of its predecessor but it’s also got a glow – a low hum, a spark beneath everything that pushes all of it into worthwhile territory. It’s interesting, it really is. I’m not sure there’s any accounting for it.

But if you can hold the Sleepwalkers comparison in your mind, try to think back to another Mick Garris joint, likewise underappreciated, Riding the Bullet. That’s the David Arquette scary-roller-coaster-movie based on that Internet-only short story Stephen King banged out on a bunch of painkillers, I think. The story is strange, and so is the film – more of a melodrama than a fright-fest, but a strangely winsome one. It’s haphazardly psychedelic (a period piece, of course) and filled with dubious acting and silly dialogue, and it makes me feel things.

Not one sequence in Riding the Bullet is straightforwardly effective, but the whole is greater than the sum of its parts, and by the time the credits roll you’ve seen something – you’ve been transported somewhere that isn’t where you are and isn’t anywhere you know of and that you aren’t sure how to get back from; it’s intoxicating, because it should be, because cinema is intoxicating if it’s cinema, and if it isn’t, it’s not, like the first film wasn’t, but the second most certainly is. It: Chapter Two is, perhaps, the best evidence I can think of that, for all his faults as a storyteller, Stephen King has it (pun retroactively intended) – he has that something that makes the somethings you write worthwhile beyond the usual trappings we’d associate with “good storytelling.” Stephen King’s literature is good literature for reasons that transcend any individual work he’s written (especially given is spotty track record), and that same something that makes his literature transcend itself operates likewise in the cinema it spawns. It: Chapter Two is better than it is, however that might work.

More than anything, it does what horror does in a way that its predecessor doesn’t: It unstitches the rug from the ground we think we stand on and unveils the operatic struggle between Good and Evil that is always playing out, even in our mundane goings-on and petty violences. The film opens with a gay couple beat to death by troglodytes. Doubtless, questions will arise as to whether that’s a particularly fitting story for Andy Muschietti to tell – or Stephen King for that matter – but it’s subtextually Rich if nothing else: Pennywise isn’t a clown, and he isn’t even “Pennywise” in any meaningful sense; Pennywise is Derry; Pennywise is us – or, better put, he is the disease that kills us, and everybody.

Pennywise is that for which we are “host bodies,” to crib a turn-of-phrase from David Dark. He’s our hate – he has to be – he comes when we succumb to it, or we succumb to it when he comes, or we succumb to it because he comes, or he comes because we succumb to it; any which way you put it, we are parasitically-linked. We are the brokenness of the world. We are that which stands in the way of God’s making Isaiah chapter 11 (“The wolf will live with the lamb, the leopard will lie down with the goat, the calf and the lion and the yearling together; and a little child will lead them. The cow will feed with the bear, their young will lie down together, and the lion will eat straw like the ox. The infant will play near the cobra’s den, and the young child will put its hand into the viper’s nest. They will neither harm nor destroy on all my holy mountain, for the earth will be filled with the knowledge of the Lord as the waters cover the sea.”) a reality.

We are the Bad News that interrupts the Good News, that – Isaiah 25 – God will “wipe away our tears” and “take away our shame,” because God can’t wipe away our tears if we are the source of our tears. If we are the factory from which sin is churned out and expelled into the world, there’s no straightforward way to purge the world of our darkness without purging the world of us. There’s no “wiping away our tears” without wiping us away. Pennywise is “the wages of sin,” and he’s sin, and he’s wages, and He-Is-We-Are-You-Are all of it, and that’s an issue we can’t solve from the inside.

The film takes some tack about “not being afraid of him.” About shouting back the demons in our midst. That’s not bad advice, at a micro-level, I suppose, but “there’s more in Heaven and Earth than we know,” as the saying goes, and there’s more in hell than we’ve got the voice to shout down. No matter how loud we shout, the hate and mire and violence we see in Pennywise is as intrinsic to us as it could be, and you can only shout yourself so down. Assuming that the Problem of Hate is solvable by something other than mass-suicide, we need a deeper solution. We need Theodicy, or something like it.

That’s not a mark against the film. That’s quite simply the limitations of film. It wouldn’t make much sense to usher in a third-act flashback to Calvary, or something along those lines, to see Christ-crucified before a disappointed-if-not-surprised Pennywise. That would be on-the-nose, for one, and probably a brush past the bounds of Hollywood’s doxological vocabulary.

But that’s a long-winded way of saying that It: Chapter Two delivers the goods – provided, of course, that what I’ve described above sounds like your version of “the goods.” To quote my friend Jesse, it’s a rare sequel that retroactively improves upon the first.