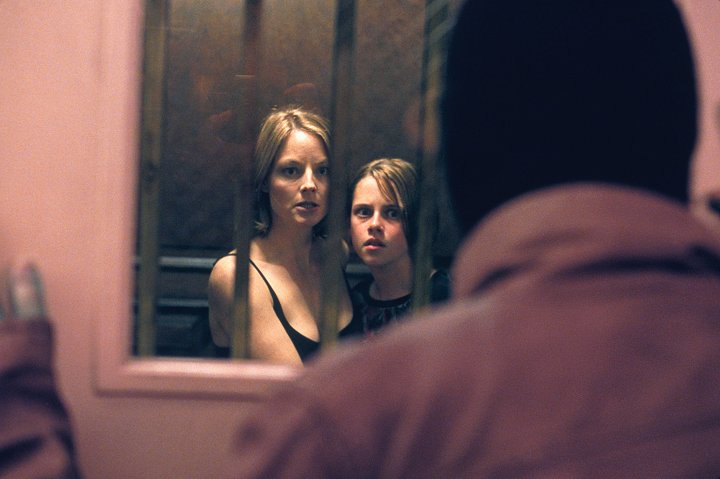 Humanity is afraid of fear.  This is a statement I thoroughly believe, mainly because I am a human myself and I know what it’s like.  And the movie Panic Room, at its core, is a movie about fear.  The movie begins with a mother (Meg) and daughter (Sarah) purchasing a new house in New York City.  They are moving, Meg is in the middle of a divorce, and the chaos of their family is evident in Sarah’s standoff-ish behavior and rebellious actions, as she rides her scooter around the empty house and ignores multiple commands to stop.  We get the sense that she does not respect her mother much, and that perhaps she is not wrong for deciding her mother is not worthy of respect. Meg seems to be a pushover, easily influenced and controlled.

As they are shown around the house by the realtor, they discover a panic room hidden in the master bedroom.  It is well-protected, safe from anything and everything. Completely impenetrable. It is a place built for hiding away, for keeping everything that matters to you safe and secure.

Have you ever wanted to hide away from the world?  Build an impenetrable fortress and stock it with everything you might need, and never come out?  I have wanted this. I have wanted to build a panic room inside my heart, to shut away all my desires and everything that matters to me so it would be safe.

Meg buys the house because the realtor tells her to, and she and her daughter move in.  The film doesn’t take long to get to the point – their first night there, three burglars break in.  They are here for money, and they weren’t expecting anyone to be inhabiting the house yet. They fight about whether to give up or continue on, whether to walk away or risk it.  Meanwhile, Meg is upstairs, unaware. She moves around the darkness of the middle of the night, doing mundane things. She is not even imagining the imminent danger two floors below her.

The burglars decide to risk it.  Meg discovers them. She makes a dash for her daughter and then together they flee to the panic room and shut the door, locking themselves away in safety.  The burglars are frustrated. The money they are looking for is in the panic room somewhere. They begin to strategize, trying to come up with a plan to get Meg and Sarah to come out.  Meg tries to intimidate them into leaving, using the violent words that Sarah instructs her to use, but it doesn’t work. They know better.

Thus begins the siege.  The burglars are desperate for the money.  They can’t walk away, can’t give up – they have too much invested in this now.  It matters too much. Meg and Sarah can’t come out – they might die. How can they trust that law-breakers such as these will even let them live?  Both sides are determined to win, terrified of the cost of losing. So the burglars try to break in, while Meg and Sarah try to call for help. They bang on the wall, flash lights at their neighbor’s window, hook up a phone line and make a call to Meg’s soon-to-be-ex-husband…no one responds.

Have you ever called for help and received no response?  Used every last bit of your energy to reach out, and been ignored?  I have done this. I have, at times, realized that my panic room is really a jail cell and that I am trapped, and I have called out for help.  God has been silent. The community around me has been oblivious, unobservant, unaware. And I have given up.

The burglars are getting desperate.  They panic, and resort to murder – because fear in combination with desperation always leads to death. Meg and Sarah watch the murder on their security cameras, and understand what is at stake, and their fear increases.  But Sarah is diabetic and she needs insulin, so Meg is forced to make a break for it. While she is gone, Sarah is captured. The burglars now control the panic room, but they are also trapped in the panic room just like Meg and Sarah were earlier.  The situation is just as chaotic, just as tense, just as desperate. Both sides have desires they will not compromise on, and it is still a stale-mate. Meg won’t leave without her daughter. The burglars won’t leave without the money and safe passage.

And then suddenly, the help arrives.  Every single cry they made was heard, every single signal was received, and they were never unnoticed.  The police show up, and Meg sends them away because Sarah is still at risk, but their presence is clear proof that this horrible event is being seen.  The authority has taken notice.

This is a beautiful picture of God.  All along, they thought their cries were in vain.  But all along, they were heard. All along, help was on the way.  Sometimes God’s plan sounds like silence, but he is always working.  And he always hears us.

The end of the movie is utter chaos.  The burglars get the money and try to escape the house.  A fight ensues, with a gun and a sledgehammer and fear and terror and anger and rage and desperation.  Meg smashes someone’s head with the sledgehammer. Someone escapes with all the money.  Someone strangles Meg with his bare hands. Sarah stabs someone with a needle. Someone is shot. The police arrive. The most gentle burglar, who has been advocating all along for non-violence, is caught fleeing the scene.  He is forced to watch the money be blown away in the wind and rain, forever destroyed. Everything he did tonight was wasted, and his fear has not saved him.

Sarah and Meg survive.  Together, they live. Together they fought and together they recover, and I saw that as clear proof of their growth.  We started out the movie with Sarah’s anger and Meg’s cowardice, but now they stand together strong and connected. They have endured hell.  They will be okay.

Have you ever wondered what would happen if you faced hell?  If you came out of your panic room and lived fully in the real world, confronted your terror and fought it to the death?  I have wondered. In this story, they won. They lost things along the way, but ultimately they came out with strength and a courageous beauty.  They came out with confidence. Fear was defeated. Could I do the same?

I believe in truth. I believe in being honest. And I believe in a God who pursues us with his love, pursues us beneath the bottom of our honesty. It is my intention for all my words, and all my art, to reflect those beliefs. View all posts by Hannah M.