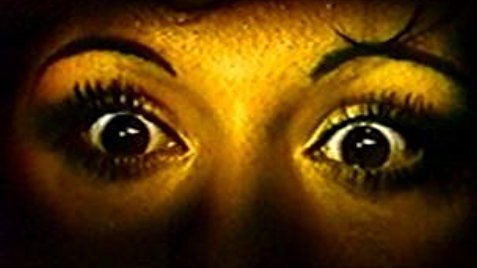 This movie comes recommended by the Rev. Paul Zahl, whose PZ’s Podcast is a fantastic mixture of theology and pop culture to which all Grindhouse Theology readers should give a listen. The Devil Rides Out is one of several horror movies Zahl devotes much time to, and which clearly made an enduring impression on him as a young man.

So, let’s summarize The Devil Rides Out. Under the credits we see a greenish-yellow Baphomet glowing amid swirling smoke. Yes, it’s going to be that kind of horror movie: the kind that goes full Baphomet. The view shifts to Baphomet’s crotch–and let’s face it, 90% of Satanism’s appeal (or more) lies in the promise of boundaryless sex. There of all places we read the words “Also Starring…” If we were getting truth in labeling it would say “Also Starring Satan’s Jock Strap in a Supporting Role.”

(If I tried really hard, I could probably work in yet another punchline about Old Scratch. I’m not going to try really hard.)

Speaking of supporting roles, the credits are underwritten by a driving, screaming, atonal score by James Bernard that obsessively replays a motif of satanic insanity: dah dah DAH du DAH!

As the action begins we’re transported to the rarefied world of the English gentry. Christopher Lee is Nicholas, the Duc du Richleau, regal in his goatee. How Mephistophelean: it’s goat-y; and yet, Lee plays the good guy this time. The Duke and his companion Rex van Ryn crash a party their friend Simon is throwing for members of an “astronomical society.” The group, which is otherwise an expansive, multicultural bunch, treats the newcomers coldly when it becomes clear they exceed the expected number of guests, which is, you guessed it, thirteen. The Duke discovers occult diagrams and a couple of live chickens just to make the party funky. He removes Simon from the premises forcibly to save him from his dangerous dabbling.

Contrasting with the occult symbology is the cross the Duke places around Simon’s neck, to protect him. It can protect him–just barely–as long as it is in place. Score one point of the Duke’s power over that of his enemy: a wizard named Mocata.

What follows are standard Satanist signs: sudden cold, a parody baptism, the “Clavicle of Solomon” (I had to look it up), Latin incantations, cross necklaces, infernal hierarchies (“Obviously, Mocata is one of the great adepts; perhaps even an ipsissimus”), Black Sabbaths, ancient tomes full of alchemy and esoterica, brightly colored robes, incense, a sacrificial goat, and an orgy in white robes to put Animal House’s toga party to shame. At the midpoint of the film, the scene of greatest horror occurs. Baphomet himself shows up, and the Duke shouts, “The Goat of Mendes! The Devil himself!” The Duke, you see, has spent a lifetime acquiring occult knowledge and never misses an opportunity to remind you.

The Duke decides the way to Simon’s heart is through a girl called Tanith. She clearly lured Simon into Mocata’s orbit, but since she is to be rebaptised on the coming Black Sabbath, he realizes she is not yet beyond redemption. The Duke and Rex manage, just barely, to rescue Simon and Tanith from the mob of Satan worshipers and the four of them retreat to the Duke’s sister’s house.

Mocata brazenly shows up and uses the power of his evil eye (the steely blue orbs of actor Charles Gray) to regain control over Tanith. (That knucklehead Rex, who was supposed to be watching her, had fallen asleep, of course.) Under hypnosis, Tanith tries to kill Rex with one of the swords that seem to decorate every wall of every room of the house. (I guess that’s de rigueur for stately manors of England.) Rex survives and Tanith runs away, not wanting to put anyone else in danger again. Rex pursues her and ties her up in a barn.

The Duke believes the Evil will be restrained only until nightfall; to prepare, he draws some kind of Christian version of a transmutation circle on the floor. They will be safe, so long as they remain inside the circle. He’s fighting black magic with white magic.

Night falls and Tanith’s eyes pop open. It seems Mocata is staring out through them, and Rex falls under their power. Several closeups of those eyes, accompanied by the main theme again (dah dah DAH du DAH!) exert a powerful sense of horror. We the audience are implicated in the evil in a way that happens in the best horror stories: we are not just watching Rex stare into those eyes, but we are staring into them too. We can’t help feeling uncomfortable, as if we too are vulnerable to demonic possession.

Richard demands the Duke go on the offensive. The Duke has a weapon up his sleeve, but “we daren’t use it, not until our very souls are in danger!” It’s the recitation of the last two lines of the “Susamma Ritual” (yeah, best keep Google within reach when you’re watching this movie). This ritual is no mere holy hand grenade; it’s the spiritual equivalent of a nuclear bomb. It will destroy Mocata but destroy the good guys too, not to mention do squirrelly and unpredictable things to Space and Time.

Of course, the Duke ends using the nuclear option. But, the movie ends with a twist I won’t reveal. Suffice it to say, the Duke’s magic is not enough to save the day. He receives help from an unlikely source. It’s a gift out of the blue. It’s Grace.

That Grace would show up in the nick of time, at the very end, strikes me as a fascinating and necessary plot choice. As anyone with the slightest understanding knows, the Duke as some kind of White Wizard or Christian Adept makes no sense. The Duke’s powers, based on years of study and practice and peering into moldy books and concocting magic potions (eye of newt, hair of goat) have only a tangential link to God’s power. The Duke’s power rests on his authority as a religious expert–which is no power at all.

So, what is the Duke doing in this movie? What audience wants to cheer on a White Wizard? Not the Christians, who only care about that five minutes of Grace at the end. Not the dabblers in black magic, who are cheering for the Duke’s enemies.

It would be interesting to know director Terence Fisher’s take on this. My understanding is that he definitely wasn’t a Three Cheers For the Devil kind of guy. No doubt some of his decisions stem from making obeisance to community standards; Christians wielded a lot more cultural clout in 1968 than they do now, to say the least. But my understanding is that Fisher wanted the good guys to win, and was sold on the plot as it stands.

The fact is, however, that without all those Gothic tropes, the tossing of the salt into the fire and the chanting in Latin and the hand waving and hocus pocus, there would be no movie. A movie consisting of 95 minutes of devout, humble prayer followed by one minute of God’s miraculous intervention would be … not a movie.

So, the demands of dramatic form give us a weird hybrid. It gives us sound and fury signifying nothing. I find it frustrating, and I wouldn’t blame anyone for watching it purely as camp. It’s sad, because one senses the fundamental sincerity of Fisher and his crew, not to mention the towering talent of Christopher Lee, who would have been great playing against type more often, if only this type of role, this Frank-Peretti-meets-Dr.-Strange type of role, had come along again.

I chose not to watch it as mere camp. Those eyes … that goatee … that pounding dah dah DAH du DAH! There’s something to this movie, despite the contradiction at its heart. Watch it in full on Youtube.