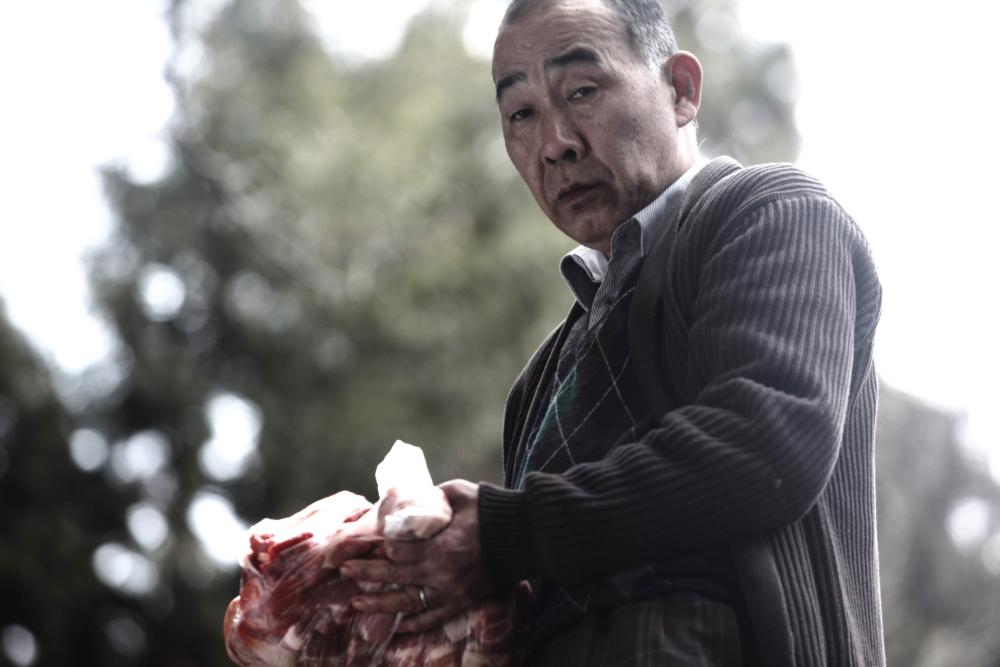 “David’s just so mean,” my friend Betty shook her head, “Nastiest things you ever heard come out of his mouth. If the Lord came back today,” her voice took on that dry falsetto that denotes incredulity, “Why – I think He’d turn him away.” She raised her hands a few inches and turned her palms upward, her version of a shrug.

Betty is an artifact from that fabled golden generation. An honest, hard worker who raised her family well, put bread on the table, loved her husband till the day she buried him, and did her Scottish-Protestant ancestors proud. And she’s a gem.

She’s also an example of the leaky-orthodoxy that pervaded American civil religion even in the “golden age of God and country.” The assumption underlying her concern for her friend David’s soul is that God’s default posture is acceptance – because most folks are “really pretty good” deep down and David, with his foul mouth and pettiness, is an exception to what’s common.

She doesn’t see much of David in herself, which is another way of saying Betty doesn’t think Betty’s all that “damnable.” It’d be wrong to call her “God-fearing,” because if she’s honest she’s never felt she had much to be afraid of.

I don’t know enough about Sion Sono’s personal life to decide whether Cold Fish is a biting critique of the toxicity of belligerent masculine tropes or itself a nasty bit of misogyny put to celluloid. More likely, it is both of these things, and more. In any case, I hope that things are going well at home.

He draws a fascinating comparison. On one hand is the passive toxicity of Syamato, a mild-mannered shopkeeper who neglects his wife’s emotional needs and condemns his daughter to a lifetime of discontent by enabling her cruelty to blossom. On the other is the outright brutality of Murata, a manic, Patrick Bateman-type who rapes women, murders business partners without a wince, and all but puts Syamato out of business.

There’s more to the story than all this, but I’ll refrain from spoiling the latter two acts. It is more baroque in its methods, but it echoes some of Mattie Do’s themes: The near impossibility of living as a woman in a male-dominated world that turns them into capital or collateral, the diverse forms that victimization takes, et cetera. But most gut-wrenching, perhaps, is the strange juxtaposition between the mundane and the murderous; As the film progresses, Sono grows shriller in his insistence that Syamato and Murata are not yin and yang figures.

On the surface, our central figures could not be more different. Syamato is the man who wears denim shorts and marries your mother. Murata is the man who runs her over in his car. But in Sono’s nightmare world, they exist on a sliding spectrum – and the spectrum is tilted, and floor is slippery.

David and Betty are on the same page, surprisingly enough. He once told me the story of how he became crippled. He leaned against the latch-door on a telephone tower that hadn’t been properly secured on. So naturally, with his body weight pressed against it, the door swung open and he took what ought to have been a fatal fall.

It wasn’t, though, and he lived to see his leg amputated. Ever the paragon of self-reliance, he struggled to make peace with his newfound immobility – and the dependence that came along with it. After a few months of what felt like hell, he stuck himself in the chest with the longest knife he could find. He woke up in a hospital to the sight of his daughter wearing her best, “Why hast thou forsaken me?” face.

By this point, David had pretty well explained how he’d come to be lacking one leg and wheelchair bound, but he continued his story.

Over the years following his release from the hospital came attempts two and three, which were, mercifully, unsuccessful. As he began what would have been attempt four, he decided to check into a nursing home instead.

When I asked him why he thought he was still alive after so many things that should have been the end of him, he said, “God won’t let me die. He’s protecting me. I have to suffer for everything I’ve done. So He’s keeping me alive.” He didn’t much take to my suggestion that God may have a different design in preserving his life.

He knows plenty well what the Bible says, too. He was raised religious as the next guy, and claims it as an identity marker just as much or more. But he’s a casualty of the American civil religion, in which the Bible itself is inconsequential against the whims of popular religious sentiment. And the staggering, if unspoken, sentiment among the moderately religious in Betty and David’s day saw the “Damnable” as their own caste, easily distinguishable from the “Decent” folk, who really needn’t fear the wrath of God.

If they’d only seen the first half hour of Cold Fish, they might have said that there were “Syamatos” and there were “Muratas.” The Syamatos could be dull, perhaps unforgivably so. They might neglect their wives and embarrass their daughters. Perhaps their shops weren’t doing well. But they were decent enough.

Muratas, though, were the scum of the earth. They were the Jeffrey Dahmers, the Friedrich Nietzsches, the Donald Trumps. In less extreme cases, the “Davids.” When the Good Lord came home He’d turn them away.

But the spectrum is tilted, and the floor is slippery. Taking Syamato “under his wing,” Murata endeavors to bring Syamato over to his end of the spectrum, to entice him out from the comforts of quiet decency. He may turn or not turn. If he does, his move from “quiet decency” to “damnability” is not a metamorphosis. Murata simply awakens what was already there.

And if he doesn’t, the fact remains that his quiet decency has never been particularly decent. He’s no devil, like Murata, but his wife lives in hell. And he built the lake of fire with his bare hands.

So the two do not fit into yesteryear’s disjunction between the “Decent” and the “Damnable,” because the disjunction doesn’t exist. “Decent” folk are the stuff that Holocausts are made of. Everybody’s part of the “Damnable.” We are culpable, so to speak, for the culture to which we are contributors.

Calvin thought that the fiery images given to the doctrine of “Damnation” were symbolic for something that ought to be more nauseating. “Imagine the cruelest, coldest parts of yourself,” he might have bellowed forth from the pulpit. “Now imagine that’s your whole reality.” It’s worth rehashing, if nothing else because it posits that we’re perfectly capable, image bearers that we are, of putting our creativity to use in actualizing a bona fide dystopia.

In other words, for Calvin, “Hell” exists because if it didn’t already we would build it ourselves. We are the architects of divine retribution, so to speak, our own executioners. History’s a headlong dash toward gehenna for those unencumbered by grace. Calvin’s hell, like C.S. Lewis’s, would have a culture of its own, enlivened by the creativity of its inhabitants, each of them pharaohistic overlords for whom “raining sulfur” would be redundant. In other, other words, the doctrine of “hell” – or more precisely, of “damnability” – means exactly the opposite of what you’d probably expect.

Because if we’re as crooked deep down as the Bible says we are, if everybody’s beautiful and damnable, so much so that Hell itself would be social justice if you’re looking from the top-down, then your enemies aren’t who you think they are. The aberrant draw to self-preservation at all costs can no longer have a foothold in us, because our example is the cross. Our endgame is to crucify ourselves for our enemies.

So the “us vs. them” mentality that has haunted culture since the days of Adam evaporates, or should. Because there is an “us,” and there is a “them” – but we have a common enemy: Ourselves. Blessed are those who see themselves as “damnable,” you could say, for they will be peacemakers.

It also means that we can rest. To know that, whether we are Syamatos or Muratas, we are what Betty and David’s generation might have called the “Damnables” is good news.

Because we are exactly as awful as we’ve always suspected that we were, and more. Which really ought to comfort us. Because Christ knows you deeply. He’s in your bones and your blood, and your thoughts and your heart. None of your inner life is secret. “Being known by God is like being seen from the inside,” to quote Francis Spufford, “but without any of my own illusions.”

And all of what scares you, and all of what ought to, troubles Him more. Even if we’re vaguely haunted by perpetual guilt, our problem is that we’re numb to the depths thereof. We are worse than we think. And so is the world. We are not going to hell in a handbasket. History is not a slow drift away from the good old days and into disorder. We have always been this brutish and merciless. Now we have cameras pointed at it.

So nothing troubles us as much as it should (if it did we’d all be institutionalized). But it troubles God precisely as much as it ought to. And mercy from Someone who knows damned well how crooked we are means an awful lot more than the mercy we think we want. Perhaps one day I’ll convince David of as much.

One thought on “[Ryan] ‘Cold Fish’ and Calvinism”