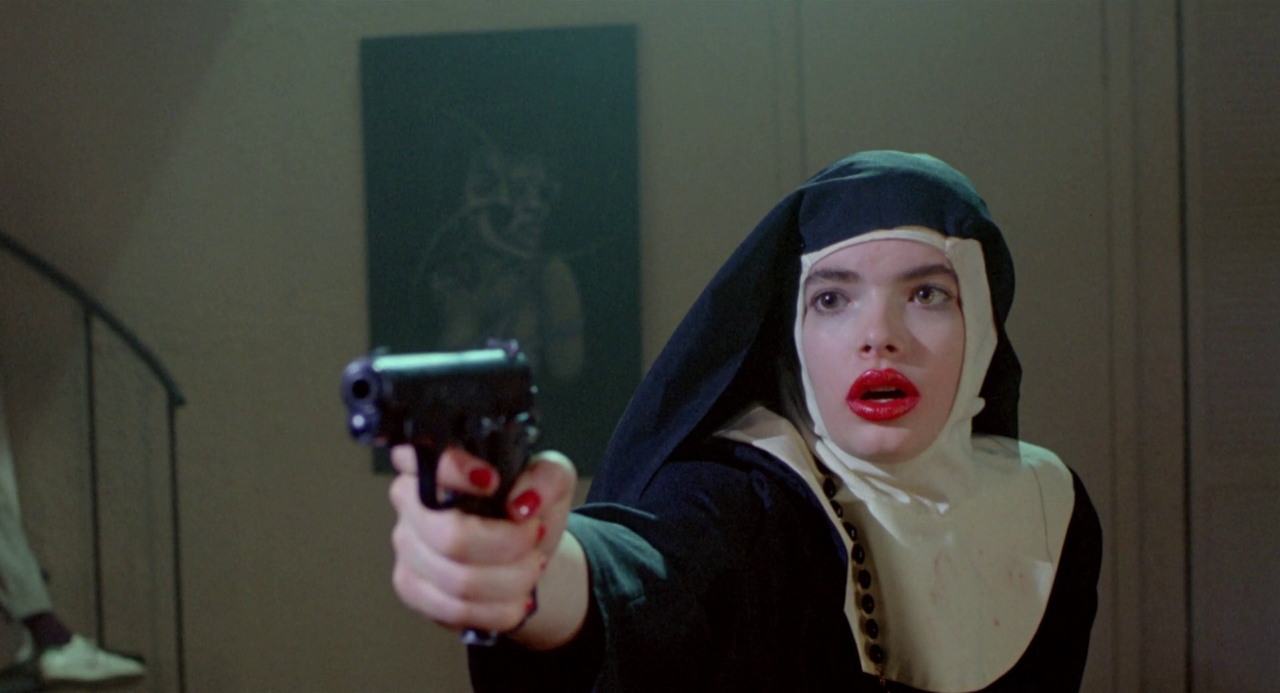 “Men are trash.” (Gen. 3:16), to put it one way. Zoë Tamerlis Lund agreed, sort of. She was Abel Ferrara’s longtime collaborator, who eventually penned his best film – and one of the best films of the 90s – Bad Lieutenant. Before she turned into a cult hero, however, she starred in his much-maligned grindhouse classic, Ms. 45.

It’s a strange film, and strangely paced: In the first five minutes, Zoë Lund’s Thana is sexually assaulted twice. In the last ten minutes, the bloody conclusion plays out almost in real-time. The middle hour consists entirely of the killing spree upon which she embarks following her multiple-rape.

There are two nauseating rape scenes in the film. They are comparatively tame, but there’s no such thing as a rape scene that isn’t stomach-churning. Especially so here – in each sequence, the image is framed so that the rapist is nearly square in the middle-quadrant, facing the viewer as he brutalizes our protagonist.

Over against what might be found in a lesser film – say, the Death Wish series, or Humanoids From The Deep – these scenes were not made to ‘sneak in’ additional female nudity. Instead, the viewer is made to experience the assault, in both sequences, from Thana’s POV. We are invited to identify with the victim.

The two crimes are remarkably easy to carry out, because Thana has no voice – literally, she is mute. I doubt I have to spell out the metaphor here.

But what if she’d had a voice? She could have called for help, yes. Maybe someone would have come. But if no one had, then what? She might have reported it, but would anyone have believed her? And if they had, would they have bothered to do anything? The dismal statistics on this front suggest that she’d lack a voice even if she weren’t mute.

Perhaps most noteworthy is the way Thana’s killing spree plays out. At first, the murders are scattered. While Thana is having lunch with some friends, for example, a man in a corner booth kisses his girlfriend goodbye, and then proceeds to approach their table and hit on them. After her friends leave, disgusted, he tells her that he is a photographer and would love to take some photos of her – alone, of course, in his studio. After he refuses to take no for an answer, she relents and follows him there, only to shoot him mercilessly once they reach his office.

Soon enough, she graduates to stalking the city streets, looking out for violent men to eviscerate: A pimp smacks one of his prostitutes because he suspects that she’s been hoarding income. A man and woman kiss passionately outside a building in the dead of night. As the woman tries to go in side, he corners her and begins to grope her. A lanky fellow with a thick New York accent cat-calls Thana – and when she doesn’t respond, follows after her aggressively, calling her inappropriate names and asking, quite hawkishly, “what makes her think she’s so much better than him”. These are just a few such instances. And there is a remarkable subtlety in them.

All of Thana’s victims throughout the middle hour are guilty of usurping the autonomy of women, sexual or otherwise, albeit the shape their transgression takes runs the gamut. The broader culture has only recently warmed to the idea that rape may take almost infinite forms – some obvious, and others unfathomably subtle. And it is still contested, and vociferously so. Hardly a week goes by that there isn’t an op-ed in a popular magazine or blog, lambasting the ‘leftist mobs’ for attempting to redefine ‘rape’ so broadly that nearly every man, and nearly every woman, is probably guilty.

And, too, why resist acknowledging the genuine harm that comes even with leering at others? That we are so averse to accepting the fact that it isn’t just creepy to ogle the woman at the coffee shop but is, in fact, a grievous transgression, speaks volumes. Much of what we think of as perfectly normal behavior is irredeemably violent, if quietly so. Ms. 45 creatively expressed as much at a time when only Women’s Studies professors and, perhaps, feminist theologians, were acknowledging it.

Perhaps none of this should be surprising. Zoë Lund was famously devout, even regarding Bad Lieutenant as a kind of gospel proclamation. In some sense, she served as an evangelist of sorts to Christianity’s ‘cultured despisers’ during the Reagan era. Although her drug addiction eventually killed her, the relatively few films she was able to make in her tragically brief lifetime are lively and resplendent – even theological – as much as they are gritty. And Ms. 45 is no exception. Abel Ferrara, the director, is a Buddhist, but his film, due largely to Lund’s collaborative influence, is as powerful and clear-eyed an exposition on Genesis 3:16 as you’ll ever find.

As I wrote in a previous week’s post, there’s always been a rather short distance between the grindhouse and the art house. If you’re looking hard enough – or, frankly, if you’re looking at all – it’s never been a secret that such an overlap exists. Infamous ‘Video Nasty’ titles like The Witch Who Came From The Sea have always been a blunt rebuke to the notion that any film that is unflinchingly violent, or egregiously macabre in it’s subject matter, amounts to puerile exploitation fare.

Ms. 45 is another such title. But it muddies the water further. Not only is there a short walk between the grindhouse in the art house, but also between the grindhouse and the Church house. Don’t read more into that statement than is there. I simply mean that films like Ms. 45 are a bit like midrashim: They can expound and clarify themes that scripture introduces. They can illustrate what scripture suggests: Genesis 3:16 introduces the unsettling reality that for more or less all of recorded history, men have exerted a wildly inequitable dominance over women, and Ms. 45 gives us a rather unambiguous crash course on how that plays out.

But there’s more. Ms. 45 is gutsier, theologically speaking, than the average clergy person is on Sunday morning. Yes, in the right mainline church you may hear a wonderful sermon on how the ‘patriarchy’ is more than just a undesirable ‘social structure’. You may hear, and rightly so, that it’s devilry. That it’s one of the ‘spiritual forces of Darkness’, – the sort that Walter Wink goes on about. That it’s not just dangerous to our bodies, to our politics, to our society – it’s dangerous to our souls.

But Lund goes further. In the middle section of the film, Thana does not simply get revenge on her assailants. She becomes, in a sense, the vengeful spirit of Womanity itself, an angel of death on behalf of wronged women everywhere. She becomes Eve’s avenger – and Leah’s, and Tamar’s, and so on. To put it another way: She becomes the wrath of God.

That is to say, Ms. 45 is clearer than many of our favorite theologians. What Genesis 3:16 lays out is not, as our country preachers probably taught, simply a fact of life, immutable. Women’s suffering is not insignificant – it is not “simply the way things are”. Nor is just, in some vague sense, devilry, either. It is, certainly, our responsibility to topple the structures alluded to in this passage, but to impersonalize it is probably to err.

This ‘patriarchy’ is not part of God’s good design, and it is a grievous abomination against which the wrath of God burns furiously. No, it is never right to go on a shooting spree, to turn men into corpses by the dozens. But the men who found themselves on the wrong side of Thana’s gun throughout the middle section of the film were not simply in the wrong place at the wrong time, unfortunate victims of an unstable woman’s inevitable meltdown. They were the worthy recipients of God’s just wrath.

That does not, again, mean that it was morally justifiable for Thana to go on a literal killing spree. And, too, in the final act of the film, Thana ceases to be a kind of ‘women’s avenger’ and collapses into a formless sort of violent misandry. It is no one’s prerogative to take it upon oneself to become the ‘wrath of God.’ As Miroslav volf once noted, the Christian story envisions a God whose wrath is well-placed, and operates autonomously from voluntary human action. That is to say, because vengeance belongs to God, violence is almost always is wrong for humans. Eboni Marshall Turman raised similar concerns in her mixed review of Nate Parker’s Birth of a Nation. That does not, of course, negate the theological connotations of Thana’s rampage.

In any case, Ms. 45 has become a cult film of sorts, but has never received the broad acclaim that it deserves. It’s often beloved for its brutality, or its humor. Occasionally, critics who do not harbor a professional contempt for grindhouse features will catch on to its feminist undertones. But rarely is it met with warm reception by Christian audiences.

There are, of course, the Mark Kermodes of the world, who recognize the aesthetic and theological value of such films. And I’d bet Scott Derrickson is a fan. But there remains, at the moment, a Ms. 45 shaped deficit in the violent-movies-that-Christians-love-anyway canon. We have begun, recently, to give Zoë Lund’s later masterpiece, Bad Lieutenant, it’s due as a “powerful tale of redemptive Catholicism“. And it’s high time that we cleared a space for her debut work as well.